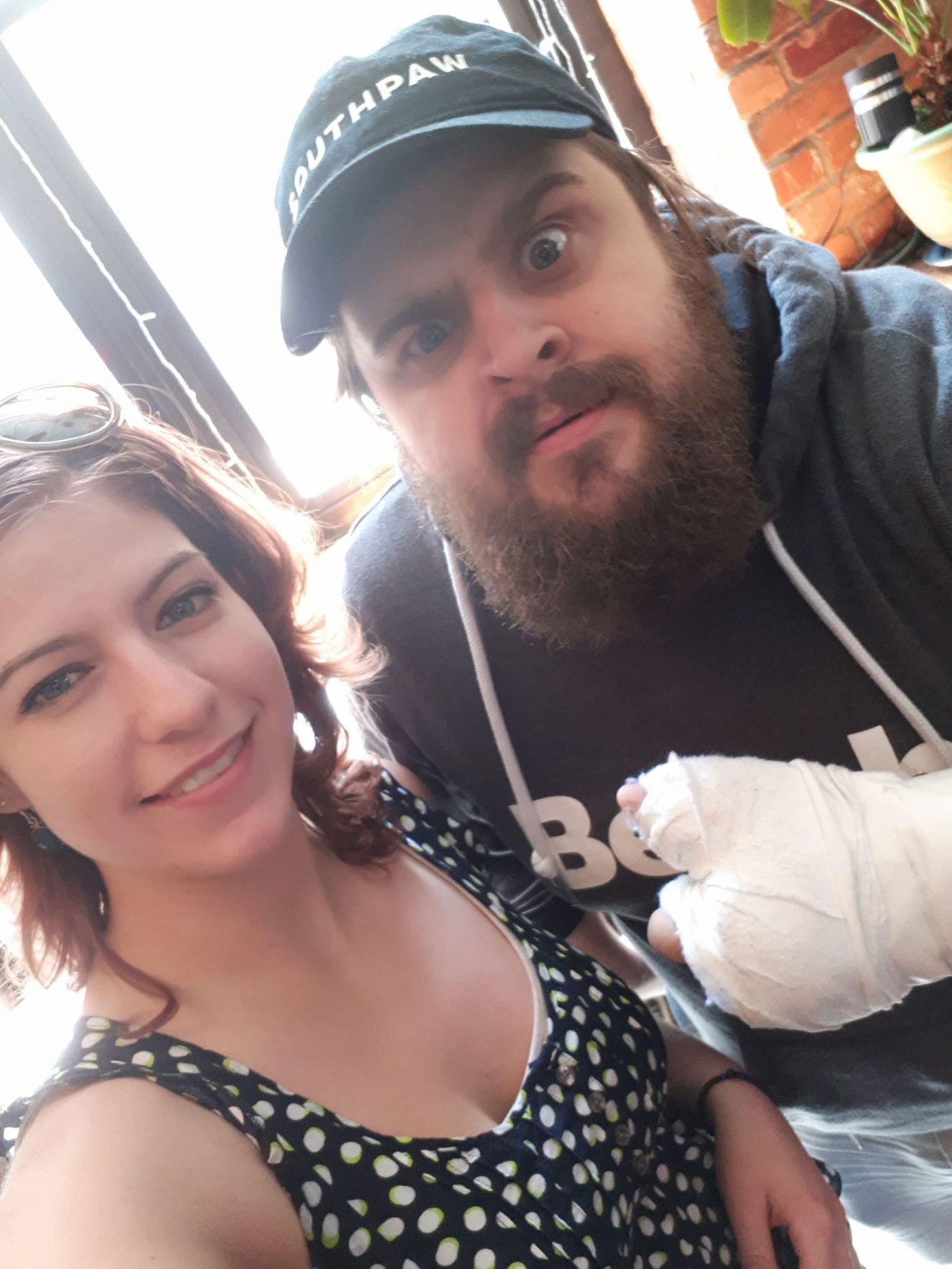 Despite having a broken thumb and a big fat cast on his arm, Cody Crain agreed to meet with me to tell me about his podcast, his YouTube series, and why he doesn’t like swimming at the beach. Check it out below!

We’re at Aroma Espresso Bar on King St. And you’re Cody Crain.
That’s true! I am!

Let’s start with this: Tell me about your podcast, Spooked!
Oh, Spooked? It’s the improvised scary story podcast where it’s never scary and it’s sometimes a story.

Perfect tagline. That pretty much sums up the premise. You improvise “spooky” stories. And you have guests.
Yeah, we bring a guest on every episode. We’ve had someone from pretty much every Canadian TV show at this point.

How did you guys decide to do the podcast?
Well, I originally thought I wanted to do an old-school radio play. And then I realized I didn’t want to write it. [Laughs]. So I was like, you know what? There’s this thing called improv… So, without any experience in improv at all, I contacted my friends Nigel and Damien, and we started the podcast. And then it evolved into being Spooked!

What’s a good episode for new listeners to start with?
I think if you start at the first episode you’ll get a good idea of the show. But, since our format has evolved and everything, I would say the Lindsay Mullan episode. That’s a recent one. Episode 135. We’ve been dabbling in different things. We have a YouTube channel for Spooked. We record like normal for our audio but we add some visual elements in there too. That’s why I suggest the Lindsay Mullan episode. That’s a fun one for seeing us visually in Margaritaville and also hearing us in Margaritaville.

What’s the toughest part of making your podcast?
I think it’s the consistency. You worry about being repetitive and everything because you’re following the same formula. But, your guests are who you rely on to freshen it up. It’s just tough to make sure we release every Monday. We haven’t missed a Monday in almost 3 years I think! 138 episodes. No Mondays missed so far.

Do you do live episodes?
We’ve recorded a few live ones. We released a live crossover with Illusionoid, another improvised podcast in the city. They released an episode with us as their guests and we released an episode with them as our guests. That was at the Social Capital Theatre. That’s the only live one we’ve released, but we’ve done some live shows that weren’t recorded. More in the future! We’ve got some good ideas rattling around. Damien and I are frequently auditioning and pursuing other things as well so we’re not big in the live show community. The improv community is bringing improvisers to us. Big improvisers that normally wouldn’t be anywhere near us, but somehow end up in our home and our studio.

And you keep them all in a closet, right?
Yeah, we never let an improviser escape. That’s why there’s a huge hole in Canadian television right now.

[Laughs] Do you have any advice for anyone thinking about starting a podcast?
I would say if you’re starting a podcast, have a clear vision and stick to that vision. Do what you’re passionate about and hope that that passion translates to bringing other people in.

I also want to talk about your other show. You have a YouTube series where you talk to people in your bathtub.
Yeah! It’s called Deep Tub.

How did that start?
I’ve always wanted to do weird talk shows. And I was debating which one to start first. It was between Deep Tub and this other idea I had which is a talk show where I just make egg salad sandwiches with a guest.

From scratch?
Yeah, I wanted to see how different people make egg salad sandwiches. And in the meantime we talk about nothing related to that during the process. But we ended up going with Deep Tub. And I like Deep Tub because it’s just me, vulnerable, in a bathtub, and a guest who is way too successful to be in my bathroom and dealing with that. But my own vulnerability, I think, allows people to open up and answer candidly about certain topics and go deep. I think the comedy comes into play when you get lost in the conversation and you forget that I’m in a tub. In every episode the guest has a moment like, “oh yeah, you’re in a bathtub right now”

Let’s talk about Sonar. You started The Sonar Network with Mike Mongiardi. Why was that an important project for you to have started?
I think both of us were in the same mindset to create a community in Toronto and make sure that the talent is seen here in Canada. There’s a lot of stigma about Canada. People think there’s not much to see, not much opportunity. So, if we create more opportunities here and show that we’re just as talented, if not more talented, here in Toronto, we can take over the States in no time. Take over LA and New York. ‘Cause everyone’s moving to those places to succeed. When you go to LA, they don’t care about CBC shows or whatever. But they should. And I think the talent pool is just overflowing here in Toronto.

Yeah, I totally agree.
Ok, let’s jump into some unrelated questions. This is actually an idea you suggested to me. Because, like you said, it’s fun to see how different people respond to the same question. So thanks for that!
You’re welcome. I have more ideas where that came from.

Yeah, I’m also starting a blog where I interview people while making egg salad sandwiches.
[Laughs] Aw, shit! I knew I should’ve jumped on that one!

Ok let’s do it.
When was the last time you couldn’t stop laughing?
My roommate and co-host, Colin, got his hair stuck in a fly trap. He was standing in front of me playing with his hair, just being a goofball, and he whipped it back right into one of those spiral-y, sticky fly traps that we had up in our apartment. So, it’s stuck on his head and he doesn’t know what’s happening. And he’s like, “But my Uber Eats is here!” So then he had to answer the door with a fly trap covered in flies hanging from his head to get his Popeye’s from Uber Eats. And then I had to cut it out of his hair. So that was the hardest I’ve ever laughed, probably. His misfortune is hilarious to me.

Amazing.
If I told you to close your eyes and go to your happy place, where are you?
For some reason, my mind goes straight to a beach. I don’t know why. I don’t like going in the water at the beach but I like looking at water. I stepped on a dead fish once at the beach. So now I don’t want to go in the water.

Don’t dead fish float?
Uh, not this one. Maybe I killed it by stepping on it. Who knows? You don’t have to further traumatize me.

Sorry.
Speaking of water, have you seen Patch Adams? With the old lady who wants to swim through noodles?
[Laughs] Is Patch Adams your favourite movie?

Yeah, I watch it every night!
So my question is: if you could wade through a pool of something that wasn’t water, what would you choose?
I want to know if carbonation would affect my body. But, I don’t want to be in sugary soda. So I would say sparkling water.

Do you have a preferred brand?
Well I’m drinking an ice cool Perrier at the moment, so I feel like I should choose San Pellegrino to even the playing field.

Ok, you have a choice for this one. You can either tell me the meanest insult or the nicest compliment you can think of.
Well, I was reading your interview with Mike [Mongiardi] and didn’t he choose to BE complimented?

[Laughs] Sort of. He chose to do the compliment but then he told me about a compliment that someone else had given him.
Right, well, I’m going to go off of that. And I want you to give me the meanest insult you can give me.

Wow. Um…
You’re a bad son to your mother and she’s disappointed in you.
Wow, I don’t think that’s true. She’ll read this and then she’ll be mad at you.

Oh god, I’m so sorry. I didn’t mean it. I should cut all this out.
[Cody laughs]

You have a very friendly smile. I think that stays with people. And an image of you in the bathtub drinking tea.
Well, at least you’ll remember me by my work!

Yeah! On that note, is there anything you want to plug? Upcoming shows?
Yeah! Spooked Podcast, rate us 5 stars.
Subscribe to the Spooked YouTube Channel.
Check out The Sonar Network.
Subscribe to Deep Tub on YouTube.
Also, I’m going to be performing at Fringe in July in a musical called Lighters in the Air at Monarch Tavern.

Check out all those things!